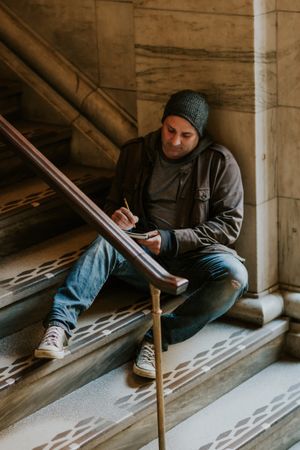 Ask anyone you meet on the street and statistics say that at least half will tell you that music is a universal language. There are about 7,000 spoken dialects in the world, but the one that most people can understand is music. While a listener may not always grasp the language, people all share emotions when hearing chords and melodies. In fact, many foreign musicians say they learned to speak English via the lyrics to their favorite songs. It’s fair to say then, music does indeed make the world go ‘round.

For lyricist/songwriter Michael Peloso, the original center of his immediate world was Newark, NJ, the only son of Italian immigrants. His parents came to America in search of a better life for their children, and Michael believes they succeeded. “I was a well-rounded child, and involved in both the arts and sports. My father has a wonderful voice and loves to sing; music was always playing in my home, in the car, on a record player. One of my earliest memories is being down in my basement listening to AM radio.”

When Michael was 8 years old, he heard a song that would change the way he listened to music forever: REO Speedwagon’s “Keep on Loving You.” “I remember running out immediately and buying their album, Hi-Fidelity, with my own money. I played that record until it turned to dust.” Michael discovered the liner notes and studied them as if it was a school test.  Even as a boy, Michael felt at home surrounded by music and knew he had found his passion. “I was in awe of the music and knew I wanted to write songs that touched people like that album touched me.”

Around the age of 14, Michael took a stab at writing his first song. In retrospect, he might not choose to play it for any one today, but it did help him realize he had a talent. “Words are my strong suit. I’ve really had to work on developing my melody writing over the years, and that’s helped me with my lyrics, but I knew I could write a song. I have a strong ear, and can get a feeling for what works and what doesn’t fairly quickly.”

Content to stay behind-the-scenes, Michael never wanted to be in a band, but did want his songs to be heard. “Music, to me, is about touching as many lives as possible. If music can help someone forget about their problems and give them an escape, then it’s doing what it’s meant to do, even if just for a few minutes.”

For him, there is no real “process” for songwriting. While his only rule is to never throw away something he wrote (because hey, who knows!), no two song writing sessions are the same. “I will hear a melody in my head and the words begin to flow. At times, I’ve written a chorus first, or a bridge, and then the rest comes easily. At other times I’ve walked away when it just isn’t working and gone back to it. Some writes have come easy where I have a song in one hour and others have taken much longer.”

One of the most important songwriting ‘tricks’ for Michael is tapping in to those life experiences. “Life inspires me. Being a good listener also helps a lot in songwriting. Relationships, world events and just being alive inspires me.” The fact that Michael even is alive isn’t lost on him. Diagnosed with stage 4 colon cancer after a tumor ruptured and went in to his liver, Michael is two-years cancer free after emergency surgery and completing chemo. He wrote the song “Shed my Skin” about his dealings with cancer and getting a new start on life. “Cancer changed how I write, absolutely. I have a better understanding of how difficult illness is on both the patient and the people who love you.”

A huge Tom Waits fan (“I Hope I Don’t Fall in Love with You” is his favorite song of all time), Michael is continuing to advance in the industry he loves. He and singer/songwriter Natalie Jean co-wrote the track “Letting Go,” which made the Grammy ballot this past year, enabling Michael to attend for the first time. “Going to the Grammys was a moment I will never forget. I was really proud to be there.”

Michael calls his publishing group "Four Simple Notes" because that’s how he started his first song, with ‘four simple notes.’ It’s a tribute to the universe allowing him to follow his muse while finding success as a songwriter. With several co-writes under his belt, accolades and awards, he has, in his own words, “kept knocking on doors and knocked them down if nobody answers.” He writes because he loves it and because he respects it, and has ever since he was a little boy with a turntable. “When someone tells me that something I’ve written has inspired them, or touched them in some way, it thrills me. It’s not about awards or people knowing who I am, it’s about moving as many people as I can with my songs.”

Life's Little Accidents, Michael's debut solo album was released on September 7, 2021 and is available on all platforms.